An oldie, but goodie. I originally published this post way back on Christmas Eve in 2013.  Since everyone is busy with last minute gift buying, I thought that now would be a great time to share my philosophy on Christmas gift giving.

I have a confession that will seem very Grinch-like: I don’t buy Christmas gifts and I don’t want anyone else to buy gifts for me either.

All of the time that I was spending money on gifts for friends and family, I was actively trying to get out of debt.  It finally occurred to me that I was spending money that I didn’t have to please others.  After running around during the Christmas season it would take me about two or three months to pay off the balance from the gifts that I had bought.  The thought finally hit me that I was being an idiot.  I decided that I had had enough and I did what made sense:

I pulled my family together and told them that I was tired of running that hamster wheel and that they should not expect gifts from me anymore.  What I was doing was insane.  I was digging myself 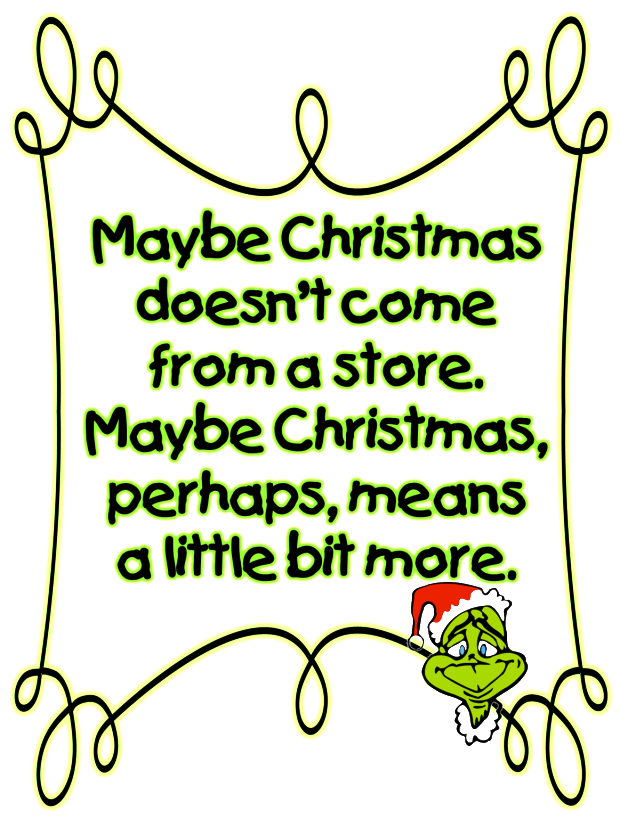 into a hole every year to please people who would probably have told me to stop spending anyway if they knew that I was trying to pay off a debt.  I didn’t make an announcement about my financial situation.  Instead, I asked them to stop getting me gifts because I was no longer going to get them gifts either.  It was only right that I should not expect them to buy me gifts if I wasn’t getting them anything.

Instead of the whole gift buying hoopla, I decided to take Christmas back to basics.  I’m a lover of most things Christmas: the lights; the songs; the cookies (oh boy the cookies); the ugly sweaters and the general feeling of warmth and cheer.  For many, Christmas has morphed into a consumer driven, rum punch soaked cornucopia of excess spending and false cheer.  I was tired of being a part of that and honestly, I wanted to end the year with more money in my pockets than when I began.

So, I called a family meeting and told them that instead of buying more stuff I would take them all out to dinner at a place of my choosing one or two days after Christmas.  Including me, there are usually six of us who go out to dinner.  The first year, I stuffed everyone into my mom’s small SUV (my little sister was in the trunk area by the lift gate firmly packed in like a crate) and drove us all down to Chinatown for a real Chinese dinner. Not only did they love the food, but my parents enjoyed having all of the kids together in one place having a family meal.  My step-father discovered his love of Chinese beer and designated drivers.  That first year dinner for six with a 20% tip cost me $200.00 and I have not looked back since.  My brother now splits the cost of dinner with me, saving me even more.

The 2016 Christmas season will be the 7th annual Sandy’s Buying Dinner holiday gift and I don’t think that anyone misses having a gift under the tree that came from me.  My mom still insists on buying me a Christmas sweater because I can not break her out of the habit.  It’s okay because the Goodwill folks get a nice sweater from me after I have worn it once or twice so that my mom can see that I did actually put it on.

The best part is that I get to spend quality time with my family cracking jokes, drinking a frosty adult beverage or two and introducing my parents to a different cuisine.  All of the years that I spent buying Christmas gifts were not lost, it just took me time to evolve into appreciating time with my family as the most important gift that I could possibly give them.  Once the moment is gone, you can not get it back. I guess you can say that when I stopped giving gifts, I discovered the true meaning of the Christmas spirit – the love of friends and family.

So, if you’re busy out there today trying to get some last minute Christmas shopping in, come over to the dark side and consider not giving Christmas gifts.  Try giving your time instead.

This site uses Akismet to reduce spam. Learn how your comment data is processed.