Go Green: Minimalism, How Low Can You Go?

This month always makes me reflect on the amount of space that I occupy in the world, and what I have done within the past year to advance myself mentally.   Most people do this around New Year’s, but for me, it always occurs around my birthday.  This month I have challenged you all to learn about and incorporate some very simple things to green up your life, but if you’re more advanced than that, you might want to think about doing the 100 Things Challenge.

What is it?  Well, there’s a guynameddave, well Dave Bruno to be exact, and way back on July 28, 2007, Dave wrote a little post on his blog saying that he had helped to clean the house, but that he felt that it wasn’t enough.  In moving things around he felt like his family owned too much stuff.  It was that even that sparked an idea in his head to get rid of some of the stuff and leave only 100 personal items.  It was a radical idea.  Could a person downsize enough to the point where they owned only 100 of their own personal items?

Dave’s little idea sparked a whole movement, with tons of people taking up the challenge, attempting to decluter their own lives and reduce the things that they own down to 100.  What about Dave?  Well, he went on to found a different blog and write a book about his experience and appropriately entitled it, The 100 Things Challenge.  He’s doing okay for himself I’m sure. 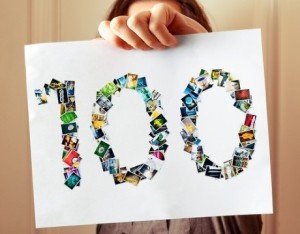 But this isn’t about Dave.  It’s about the minimalist movement.  For way too long as a nation we upgraded and supersized our way into lifestyles that we could not afford.  Houses were being built larger than ever.  We bought larger televisions, faster computers, and more…stuff.  Frankly, much of it was stuff that we probably didn’t need and we did it all with money that we didn’t have.   It makes you ask yourself, just how much is enough, and when did we cross the threshold into having to much?  What are we to do?  Well, some have raced in the opposite direction, and like Dave, they’ve decided to let go of much of the things that they own, and leave only the essentials.  They call this minimalism.

Two of the largest movements in the minimalist movement is de-cluttering which often leads to the second movement which is downsizing.  I admire people for wanting to do more with less, but sometimes I think that the pendulum is swinging from one extreme to the other extreme.  Instead of just downsizing, some people are building their own Tiny Houses.

I’ve been fascinated with the Tiny House movement and its preeminent blog, Tiny House Blog (how appropriate).  Tiny houses are typically very small, often owner made homes that come in at a fraction of the dimension and price of a normal sized house.  Most of the tiny houses that I have read about are under 500 square feet (about 46 square meters).   Living in tiny houses forces their owners to embrace a minimalist lifestyle because really, there’s nowhere to put too much of anything.  I admire people that can do this, especially since my investment home sits on a small 1,520 square feet lot and I thought that the house is small since the deck takes up about 25% of the property. 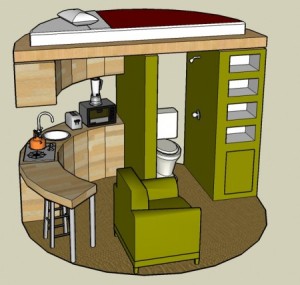 This general movement toward a smaller, more simple life isn’t new.  Europeans and Asians live in smaller dwellings and drive smaller cars.  Traditionally, so did those in the U.S., but we lost our footing and I believe, we are somehow trying to get it back.  Can you image how much less stress you would have if you didn’t feel compelled to own the largest, latest, newest, most expensive, exclusive anything?! Talk about relieving stress.

But just as important as reducing stress is the impact that having a smaller footprint can have on our environment.  Smaller houses take less to be built, use less fossil fuels to heat, and because you can’t stuff it with too much, produce less waste.  Living a minimalist lifestyle can have the same positive effect.  Less buying means less throwing out means less waste means smaller impact.

I certainly think that this is something that we should at least look at as a model of what could be done, but not necessarily go so towards the extreme.  If you are in debt, you can start by trying to be a minimalist with your spending, and moving from there.  We should each make a commitment today to do more with less and to stop trying to outdo the neighbors.

If you’d like to read more about people that are moving in this direction, check out the places that I linked to above and the people below:

Finally, I leave you with my favorite quote from Everyday Minimalist:

The less you have and do, the more you will feel free.

Go Green: 5 Products That You Should Avoid Using