I’m Growing Food In My City Back Yard With Aquaponics

by Sandy Smith
in Off The Reservation
0

This post has been months in the making.  I have literally been thinking about this post for about four months now, and it’s all finally matured to the point where I can share everything with you.  I’m growing food including edible fish in a greenhouse in my back yard using a system called aquaponics.  Yes, I live on a small plot of land in New York City, and if you have even the tiniest bit of room in a spit of an apartment, you can do something like this too.

First, a disclaimer.  I am a science geek and love these kinds of experiments. I also like gardening as long as I can get the dirt from under my fingernails.  So, I combined my love of experimenting with my love of gardening to complete this project.  Oh, and I have that biology degree hanging on my mom’s wall.  It might not be for everyone, but it’s worth sharing.  It’s time for a science class kids!

Aquaponics is the hybridization of hydroponics where food is grown with just water and no dirt, and aquaculture, where fish are farmed.  Say what? Well, in aquaponics, you grow fish in tanks and use the water in the fish tanks and all of the fish waste as fertilizer to grow your pants.  It’s called a closed-loop system since the 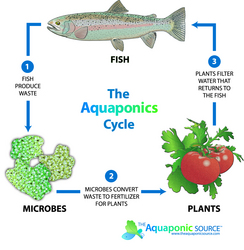 water is not discarded, and if everything is done correctly, you do not need to add much to the system to keep it going.  I’ve put an awesome little diagram explaining the system to the right.

You might have heard of hydroponics before because yes, lots of home growers use that system for growing their recreational herbaceous smokies.  I’m not a smoker, so the only green and leafy things growing in my yard end up on my plate.  But, if one wanted to use such a system for that purpose, it’s certainly viable.  I’m not endorsing anything, I’m just saying that it’s a possibility.

What’s The Purpose Of An Aquaponic System?

This system is actually highly efficient for growing both a protein and vegetable source, especially in areas where water is scarce.  Growing vegetables take a tremendous amount of water as anyone who has ever watered their lawn can attest.  When plants are grown hydroponically, nutrients normally found in soil must be added to the water.  Eventually, that water must be tossed out. The same is true of farmed fish.  Fish produce an abundance of waste water which must also be tossed out, potentially polluting drinking water through run off.

By marrying these two processes, water will leave the system only when absorbed by plants or through evaporation.  Fish waste is carried to plants in grow beds that do not contain soil.  The fish waste is converted to nutrients for the plants.  When the waste is absorbed by the plan the result is clean water which is then returned to the fish tank.  It’s probably

the most ingenious thing that I have ever heard of.

What Can Be Grown In An Aquaponics System?

Because this entire system is water based, plants that do well with water would be best.  Plants such as potatoes will not work well with aquaponics, but your cucumbers, tomatoes, squash, peas, lettuces, herbs, spinach and strawberries will love it – at least that’s what I’ve been successfully growing in mine.  I also have beets going, and while they haven’t died yet, it’s too early to yank them out to tell how well they’re growing.  The best part about my system is that I have grown every single thing that I mentioned from seeds.  There was no spending money on seedlings because, well, I’m cheap {catchphrase baby!}.

Alright you’ve heard the background information, but what you really want to see if my system in action, don’t you? Go on. Go look at my system.  I built the deck myself and my BF and I put the greenhouse together.  He actually bought the greenhouse for me as a birthday gift.  What can I say? He knows that flowers isn’t my thing, but a greenhouse? Way to a nerd’s heart.

We also built the grow beds and hacked a rainwater barrel into our fish tank.  I’m not going to kill you with details, but I am going to show off with these photos. Click to enlarge.

If you’ve made it this far, I’m proud that I didn’t completely bore you to death.  I would be happy to provide a bunch of resources for you but I will say that you can build a simple, in house system to experiment with and then move to a larger system outdoors when Spring rolls around next year.

Finally, I leave you with the grandfather of the aquaponics movement, Murray Hallam. I hope that this video will get you interested in potentially growing some of your own food.

P.S. All of the photos here were taken in the greenhouse!

Why Bother Learning Another Language?

I Don’t Buy Christmas Gifts And I’m Not Sorry