It’s time to share with you another way that I’m making some extra money online by building niche sites.  I love this series because it shows that no matter your situation, if you have some skill or interest in a particular topic, you can usually find some way to monetize it online!  That’s the true power of the internet.  But on to how I’m making money.  This time it’s with niche websites or blogs.

What Is A Niche Site?

Finding My Own Niche…and Failing

I first learned about niche sites by somehow stumbling into Pat Flynn’s site called Smart Passive Income.  He was challenged to a niche site duel by Tyrone Shum.  The goal was to see who could build a niche site from scratch and get it to make them some money.  The only rule was that they could not pay for traffic.  This duel started way back in August 2010 and I followed along intently.   The great thing about these two guys is that they updated everyone following along regularly and showed us their techniques for getting their sites up and making them money. Some other bloggers soon joined into the niche site duel and shared their own techniques as well. Pat Flynn’s site is now making him about an extra $1,500 each month!  What could you do with an extra $1,500?!

Motivated by these posts, I thought of building my own niche site, but I really had no clue what to write about.  I looked around for a hot and trending topic.  At the time, bed bugs were a huge problem in New York, so I thought about doing one on bedbugs, but I really wasn’t motivated and didn’t put the effort into it.  In October 2010 I started building the site, How To Kill Bed Bugs Now (I’ve since deleted the site).   About a third of the way into building the site and adding articles, I stopped.  I just wasn’t motivated enough and I didn’t have any money to hire someone to do it for me.  I know that you’re wondering, if you didn’t have any money, how did you build the site.  Simple.  It was only $6.99 to register the domain (I caught a sale) and I already had hosting for this website, so I just slapped it under my existing hosting plan for free.  The template that I used was also free.  So, essentially it only cost me $6.99 and my time to build the site. But a half-completed site really won’t make you money.

Thinking of building your own site? Put your perfect URL (that’s the stuff after the www) in the box below and see if it’s available. Test it out.

I continued to follow Pat in his duel and updates.  In the meantime, I was having problems with my tenant and since it was really popular on this site, I decided to build My Tenant from Hell (again only $6.99) to share those stories with you where I wouldn’t have to censor myself since she made me want to curse a blue streak every time I wrote about her.  I didn’t want this blog to become all about my tenant, plus I wanted other people to be able to share their stories and avoid the hell that I had gone through.  I built that site in January of 2011, I think.  I never though of it as a “niche” site per se, but that’s essentially what it was.  In its first nine months of existence, the site made me over $400 and I updated it once per week, when I remembered.  I didn’t promote it at all. Half of the fun it was that some of the stories came from you!  I don’t even have to think about.  At some point, I got tired of updating a site constantly. I wanted to be lazy and make money.

Okay, so this niche site thing might just work.  What if I had 10 sites and they could each make me $100 per month?  That would be an extra $12,000 per year.  It was an ambitious goal and I have a short attention span, so I knew that I would never take the time to do that, but the potential had me thinking.  Okay, let’s try this niche site one more time.  But again, what could I write about? 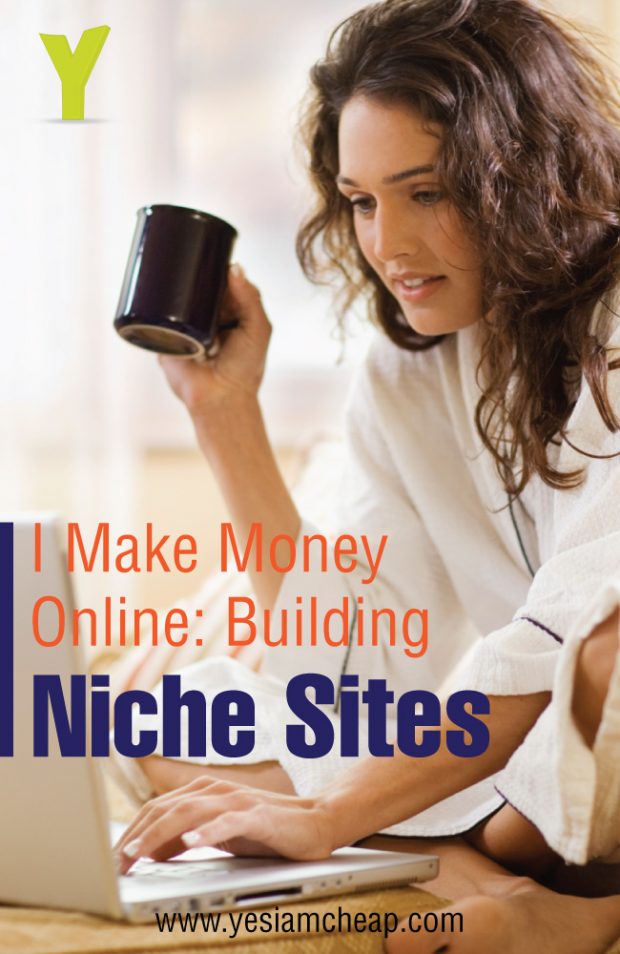 I took a different approach this time.  I came back to this blog and looked for the one article that made me the most money from Adsense advertisements.  For those of you wondering what that is, it’s the ugly little advertisement block on the top right hand part of this page that you hate and some of you click on.  Every time you click on one of those (well, almost every time) it earns me money from Google. Every time someone comes to this site and an ad loads, it makes me a few coins as well. Okay, so which article was earning me the most money?  Funny enough, it was one short little article that I had thrown up on this site almost 7 years ago and forgotten about.  I hadn’t done any research on the topic or anything.  I just shared some information that I though you would find helpful.  It turns out that many did find it helpful and it was ranked #1 on Google for it’s topic.  Sweet!

I looked around on Google to see if anyone else was really writing about this topic and there were a couple of other sites that had some information, but no dedicated site…at the time anyway.  I wondered if this topic could stand alone as a site.  I figured for $8.99 (domain prices had gone up), I might as well give it a try.  I registered the site and literally spent two weeks putting articles up.  Funny enough, people started finding the site even before it was finished, and it started earning me money.  Okay, it was only $4.27, but that was about half of its cost, so that was good, right?

The first month that it was up it earned me $34.56.  Kaching!  I was in the plus. During this month that one site that I spend two weeks building back in 2011 will earn me almost $400 from Google alone. Ask me how often I’ve updated it since building it? I think I updated it once and then I paid a virtual assistant something like $100 to update it another year. Considering that I am not selling any products or direct advertisements, and it’s 100% passive, that’s pretty damn good.

One of the most important things about the niche site challenge was getting your site to rank high on Google for its search terms.  My site doesn’t rank in to top 100 for its key words because no one has linked to it.   For those of you wondering why that’s important, it’s kind of like throwing a party and forgetting to send out the invitations.  If people show up and bring a gift it’s totally random and by accident.  That’s what I have done.

I need to go back and work on some search engine optimization and I should try building links that points to the site.   I haven’t done that because: 1) I’m lazy; 2) I don’t have much time in my day; 3) I’m too cheap to hire someone and; 4) It’s already making me money.  Don’t forget, I still have an article here on the same topic that’s also making me money.  I know that my efforts will be directly proportional to the amount of money that I could make from the niche site.  I can easily see the site making me $1,000 every month once if I start building links, or from my example, sending out the invitations.

So, you want to build a niche site, but have no idea how? There are plenty of people that can and will do it for a fee! You can always hire a virtual assistant to do it for you. Virtual assistant fees can add up though and take more time and money than you need to spend. A lost of hosting companies now come with a site builder that basically lets you use a template to build your site quickly and pretty much for free. Listen, you don’t have to be a web developer or some super tech geek to build your own site. You can actually have your site up really quickly leaving you nothing but time to make money on your site.

Lots of people do a ton of research to help them determine what subject matter would be best for them to build a site on.  You can do that.  If you choose to do so, I’ll recommend this primer by seoMoz on what they are and how you can research. Personally, I don’t even bother. You’ll want this information when we talk about SEO as well below.

Alright, so you’re ready to build your own site.  Let’s do this!

I’ll be updating this article as time allows but now you too have the basics on how to build a niche site and make money from it.  Sites and links mentioned in this article may contain affiliate links. Why wouldn’t I monetize THIS article? Come on.

Zombie Debt Is Popping Up Again