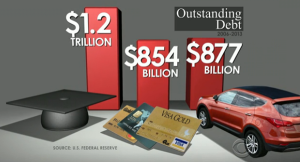 According to the Federal Reserve, as of 2013 U.S. debt holders owe a total of $1.3 TRILLION in student loan debt – vastly more than what is owed on auto loans and credit cards and surpassed only by mortgage debt. Holders of consumer debt and mortgages have a leg up on student loan debt holders since they can easily refinance their debt to potentially lower interest rates.

A total of 30% of all student loan debt is currently in deferral, default or forbearance, indicating that a significant number of individuals with student loan debt are having a hard time making payments and affording their daily living expenses. In fact, people age 60 and older who should be thinking about retirement owe more than $36 billion in student loan debt. This debt is dragging the economy downward since individuals who would normally move out of their parents’ homes and begin life on their own are now saddled with debt that has made them slow down their spending in other areas.

If you think that these individuals can just file for bankruptcy and have their debt wiped out, think again. Student loan debt will follow you to the grave and will most likely reach out to your estate for recovery once you have already passed on.

Massachusetts Senator Elizabeth Warren has introduced the Bank on Students Emergency Loan Refinancing Act that would allow student loan debt holders to refinance their government held debt to lower interest rates that might lower monthly payments enough to make a difference in millions of people’s lives. I’m not a fan of the entirety of the bill, however, I am a fan of anyone who is willing to do SOMETHING to address student loan debt and its effect on millions of individuals.

If you have a few minutes, listen to a portion of Senator Warren’s speech on student loan debt as she introduced the proposed bill on May 6, 2014.

How I Went From Being Broke to Being Cheap

How I Can Afford To Retire At 40

How I Can Afford To Retire At 40