I had the opportunity to speak to a PR representative that works with Coupons.com. My purpose was to determine how they felt about extreme couponers and their shopping tactics.  To truly understand what they were facing, I sat and watched four FULL episodes of the show plus a bunch of clips.   I have to say that it’s a lot to digest, and I’m going to work with the assumption that you have not seen the show, Extreme Couponing on TLC.  Below is a clip of one episode so that we are all on the same page.

For the purposes of this article  extreme couponing tactics include the following:

Those are some pretty smart tactics if you have the time to employ them.  By simply using the tactics above everyone should be able to same money every single time grocery shopping is completed.  However, the goal of extreme couponers is to pay as close to nothing as possible.  Hey, I want some free groceries too, and I’m pretty good at racking up on some groceries.

Separating the Regulars and Extremes

What you will notice with some extreme couponers is the way in which they acquire all of the coupons that they have.  This is probably the first area where you differ from the pros.

Just the way in which you obtain coupons won’t necessarily make you an extreme.  How you maximize their value count as well. Extremes typically stack coupons with store sales, use multiple coupons for the same item, and shop at stores that double coupons.  Getting everything to align is hard work.  Many of the clips that I have seen detail the amount of time that extremes devote clipping and matching up coupons with the sales.  I’ve seen individuals devote anywhere from 30 to 60 hours each week towards this effort.  That’s the equivalent of a full-time job.  Many of the shoppers profiled on this show are stay-at-home moms or make their living by teaching extreme couponing methods via blogs or speaking engagements, so they may have the time to devote to this effort.

Houston, We Have A Problem

The problem is that some of the extreme couponers profiled on the show have been known to and are shown committing fraud.  I list some of the fraudulent activities unknowingly shown on some of the aired episodes here:

All of the activities highlighted above have been noticed on the television show.  Not only are the activities illegal, but it gives the rest of us using coupons a bad reputation.  But it’s a victimless crime so no one suffers, right?

The manufacturer loses since coupons are used to basically entice you to try a new product. If someone is clearing out the entire shelf of the product, the chance of a new customer having access to that product has been removed.  Even worse, coupons intended for a target market never reaches them because someone might be busy stealing the coupons out of the homeowner’s driveway or having entire bundles of coupons diverted to an extreme couponer. The manufacturer loses a potential new customer. 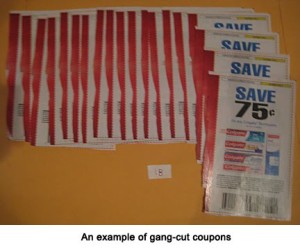 Did you know that selling coupons are illegal?  No?  There are lots of “coupon clipping services” that will send you coupons if you pay for them. Technically they say that you are not paying for the coupons since that would be illegal.  Instead they say that you are paying for their service of clipping the coupons, but from what I have seen, the “fee” is always based on the face value and desirability of the coupon.  And additional “processing fee” is also added at the end.  When multiple coupons have been stacked together and cut the same way (shown right) manufacturers refer to these coupons as being “gang cut”.  Gang cut coupons are usually cut the same way by individuals that sell hundreds of coupons.  The store loses when these coupons are used because they will not be reimbursed for multiple coupons that the manufacturer determines has been illegally redeemed or are gang cut.  This includes coupons that you might find on eBay. The stores also lose.

If your store is not being reimbursed for coupons, they will roll back programs that benefit customers.  My local store will no longer accept more than three $1 coupons that are doubled in any transaction.  Three!  It used to be unlimited.  Some stores like Kroger has discontinued coupon doubling in some stores.  I am sure that the supermarkets and stores will continue to combat fraudulent practices that hurt their bottom line by doing what comes next – raising prices or providing fewer sales.  Finally, you the consumer, loses as well.

Are You There God?

I am a Coupons.com affiliate and avid user of their products.  Sidebar – you should be too.  It’s simple.  Click the link or the sexy button way over there in my sidebar every week since they load new coupons all of the time and print coupons right in your own home.  Okay, back to regular programming.  I was contacted by Michael from Kaplow PR on behalf of Coupons.com to talk about real world shopping without using extreme methods.  While I had Michael’s ear, I couldn’t resist asking him about Coupon.com’s perspective on Extreme Couponing.  According to Michael,

“Extreme couponing isn’t consumer friendly because it creates out-of stock situations, where consumers cannot purchase products on their list. And, manufacturers or retailers don’t like empty shelves because no one makes money in that scenario.

When extreme couponers move from computer to computer printing out coupons online, they have reduced the number of coupons that are available to everyone else.  Again, we all lose in this situation.

“…our great disappointment with TLC’s current series, Extreme Couponing, and…we hope they address potentially illegal acts that appear to have been portrayed on the show. Professionals in the coupon industry believe this show creates unrealistic expectations about how coupons work and promotes the misuse of coupons. For example, the show appears to…[focus] on consumers who have procured large quantities of coupon inserts from unknown sources, which may raise civil and/or criminal issues.”

Some of the show’s participants might not be aware of it, but the CIC has been aggressive along with the help of the FBI, at prosecuting individuals that have created 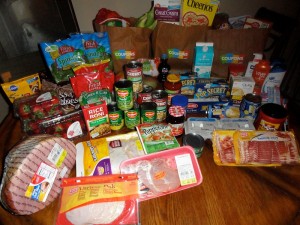 and distributed counterfeit coupons. They have done so with individuals posting ways to produce counterfeit coupons, and those distributing them on eBay.  If I used some of the tactics above, I would quietly consult with an attorney to see how defensible my actions would be in case I faced prosecution.

Coupon manufacturers recognize that people are abusing the current coupon system through the bar code matching. If you look at new coupons, they have become more sophisticated, using up to three different bars on each coupon. New technology is being rolled out to updated registers that are better able to identify counterfeit coupons and reject attempts at coupon matching or spoofing.

Although Extreme Couponing might be unrealistic for the average person, the coupon industry does want you to save money.  Coupons.com sent their savings expert, Jeanette Pavini on a real world shipping trip consisting of a seven day meal plan for a family of four.  She was allowed to use store circulars, online coupons, and the app Grocery IQ.  She was able to save over 45%  on her shopping trip.  For those of us that noticed the lack of vegetables and nutritional foods on the shopping list of the extreme couponers, Jeanette’s list actually included vegetables.  I’ll include her shopping list here (PDF)  as well as the total cost and savings.  As I previously mentioned I saved over 60% on my shopping trip once and I consistently save at least 15% with almost no effort every single week.  By combining those savings with a cash back credit card, one can easily and consistently save money on every single shopping trip.

Are all extreme couponers bad?  I don’t think so.  In fact, some of the individuals featured on the show are ladies that I had previous recommended.  Way back in March of 2009 I recommended a series of videos by the Double Savings Divas on how to rack up at CVS.  The twins were featured on the show and highlighted perfectly legitimate ways to reduce their spending.  One strategy that they employed as sharing their stockpile.  I also noticed that while they did grab multiples of some items they didn’t go to the extreme of pulling 50 of one item.  I believe that the most they picked up were 20 Healthy Choice soups. When they’re on sale, I usually pick up at least 5 cans.  Some of the other couponers were also quite responsible and great representatives of the frugal community. You can see their entire grocery list and their comments about their shopping experience in the video below.

One final note.  There was an episode where the announcer kept repeating that the extreme couponer had an MBA and used her business skills to help with her shopping.  You do not need an MBA to track your spending on Excel spreadsheets.  Also, this particular couple were in the process of planning a vacation and need an additional $500 to meet their budget for the trip.  What did she do?  She went to the grocery store where the retail price of the items came up to over $500 and through the use of coupons had her balance reduced by more than $500.  Because of this $500 “saving” she reasoned that they could now go on the trip.  My problem with this line of thinking is that if you didn’t have the $500 to begin with, and never budgeted to spend $500, then you didn’t save $500.  Unless they planned on selling the groceries for their retail price, they would still have a $500 shortfall for the cost of the trip.  At least that’s what my MBA says.

As the old adage says, you can’t believe everything that you see on TV.

This site uses Akismet to reduce spam. Learn how your comment data is processed.