by Sandy Smith
in Rental Property
0

I became a landlord (landlady?) on April 7, 2010 when I purchased an investment property with a tenant in it.  The property was purchased from a friend and he assured me that she was a wonderful tenant.  Better yet, her rent was always on time.  Since my tenant has terminal cancer, a government funded program paid for 75% or her rent which was sent directly to the property owner.  The tenant was responsible for the balance as well as all utilities.

I would basically be responsible for upkeep and maintenance, changing the batteries in the smoke and carbon monoxide detectors and, of course, the taxes on the property.  Based on my investment, if nothing major broke, and I had a 90% occupancy rate with no rent increases or major tax increases, I would break even in a little over three years with no mortgage on the property.  It seemed like a perfect opportunity for me, until the tenant decided that paying her balance of the rent any time before the middle of the month was too bothersome for her.

I won’t get into that because I have spoken about it a few times and you can read the related articles below, but last month I sent her a notice to vacate for non-payment of rent, and this month I firmly took the reigns with her.  Her rent is due on the first of the month, but she has until the 5th of the month to pay with no penalties.  Her rent is not considered paid until I have the full balance of the rent.  December 5 passed without her rent, so I promptly mailed her a rent demand letter on December 6.  I heard nothing from her but the overdue balance popped up into my bank account (minus the late fee) on the 10th of the month.  I called her that day letting her know that I would need to visit to change the batteries on the smoke and carbon monoxide detectors on the 11th.  My lease outlines a 24 hour notice before I will enter the property.

Knowing that she has a humongous dog, I asked that the dog be crated if she would not be at home.  She never answered my calls or returned my voicemail because she has been avoiding me.  When I arrived at the home on December 11 she was not there and the dog was loose on the inside.   I decided to not tangle with a 100+ pound pit bull mix and instead did an external inspection.   I know that some of you have thought that I was exaggerating, but this time I have proof!  To say that the outside was filthy was an understatement.  My brother was my copilot and brought along his trusty camera phone.  I give you the exhibits below and note, the images overlap slightly and there was more not caught in the photos.  Click to enlarge. 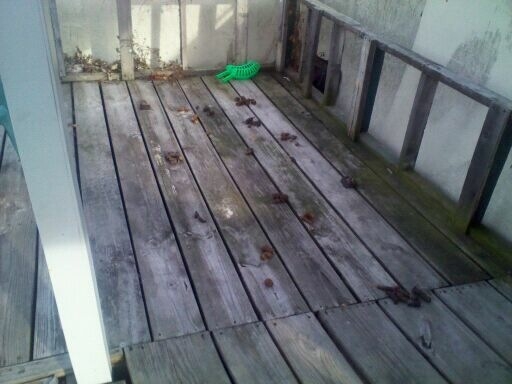 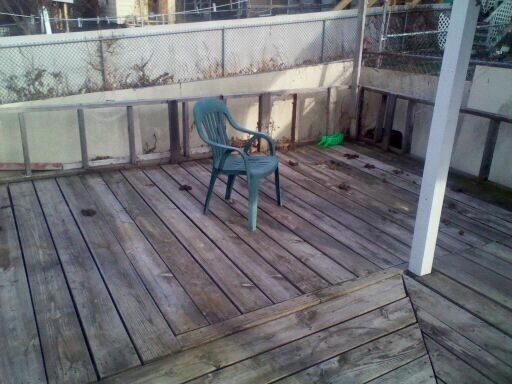 There was garbage in the back yard dating from Halloween based on the pumpkins that were tossed around the garbage cans.  There was at least a week worth of dog poop on the deck.  I didn’t step on the deck in case I stepped into one if the dog’s packages.  I was livid.

I thought that my tenant would avoid me, but I was prepared to wait for her the entire day.  Instead of sitting there like a pair of undercover detectives, my brother and I took care of some other things that we had to handle, ate, went shopping and circled back to her, wait, it’s MY home close to 7pm.  She was home!  Not only was she home, but the front door was open and I could see her sitting on the couch, drinking wine and smoking a cigarette.  Please forgive me if I have no additional sympathy left for her when she complains that she is sick.

I knocked on her door and she was quite startled to see me there.  I know that she had expected me to be back in New York since it’s a four hour drive away.  I have a lead foot and anger to guide me so I usually make it in three with no breaks.  She came to the door swearing that she had meant to call me back and forgotten all about it.  Meanwhile, Cujo was barking its head off and the crazy woman opened the door.  I have a dog and I appreciate other people having pets.  I also don’t categorize all pit bulls as being vicious, so I won’t allow any comments of that nature.  This beast was less of a pet and more like teeth and muscles with bits of fur.  I placed myself behind the door while the dog ran for my brother.  Sorry, but it was every man for himself at that point.  I yelled to her that she needed to put the dog away or lock the dog outside while we were inside.  My brother finally got into the house with neither one of them being bitten.  I’m pretty sure my brother would have beaten or bitten the dog if it had bitten him.  Great, we were in the house!

Immediately she launched into, “I meant to call you” and “I’ve been so busy” and “I’ve been sick” and “My house is never this messy” all of which I ignored.  While my brother went about changing the batteries on the smoke detectors (it needed to be done anyway) I attempted to speak to her.  She never made eye contact and basically flitted between two rooms the entire time.   I told her that I had been there earlier and the dog poop in the back yard had to be cleaned up immediately because I would pass any violations or summons received directly to her for payment.  This is when the “I’ve been sick” was reinserted.  I also told her that if she does not at least call me to let me know that her rent would be late, then I would have to send her a notice and begin proceedings.  I also told her that if she did not answer my phone call or message (I only ever call once or leave one message) then I would assume that she did not intend to pay her rent.   According to her, she never wants to move so she would try to be on time.

Walking through the house I noticed a fresh HOLE in the linoleum on the kitchen floor.  There was a crack in a window and of course the house was generally messy.  I can’t tell someone how to live, but I did point out the broken window.  She assured me that someone would be by on Wednesday to fix the window.  That reminds me that I’ll have to check in with her about that.  She wrote me a check for January’s rent which I will deposit on the third of January.  Let’s hope that it doesn’t bounce.

On the long, lead foot drive back to New York, my brother and I bounced the entire situation off each other.  This is what we have decided:

This entire experience has been interesting to say in the least, but this process has shown me that I need to think less about the tenant’s sob story and more about my investment.  I hate to look at this as just a business dealing, because that is not the person that I am, but I am being forced to do just that.   The fact is, had I purchased this house with a mortgage and counted on that rent to pay for the home I would be screwed.  Thankfully, I did not.

This post inspired me to write, Finance 101: How to Avoid Bad Tenants.

You might also be interested in:
Taking The Plunge
Time to Be The Hardnosed Landlord?
My Tenant’s Rent Is Late…Again
My Tenant Paid The Rent

I Predicted the Mortgage Fraud Crisis

Finance 101: How To Avoid Bad Tenants

Finance 101: How To Avoid Bad Tenants

Why I Hate Air BnB

I Don’t Buy Christmas Gifts And I’m Not Sorry